The Aeronautical Engineering department at Inholland University of Applied Sciences in Delft, The Netherlands, is changing its curriculum to support the growing global needs for a sustainable future within the aviation industry. The university has decided to electrify an existing airplane through an applied research project and develop educational content during the process of the conversion.

Early 2019 students and researchers within the faculty obtained an unfinished build of the Dragonfly. The Dragonfly is a two-seater airplane made from fibre reinforced composites featuring a tandem wing layout originally supplied by Viking Aircraft as a kit for amateur construction. Due to the size and weight of this aircraft, the design is attractive for conversion to battery electric propulsion. Initial studies at Inholland have demonstrated the feasibility of this applied research project resulting in the next steps towards cleaner, quieter and smarter aircraft designs.

“Aeronautical Engineering students Randy, Jitse, Patrick and Kiril performed crucial research for the roadmap of Project DragonFly and delivered extremely valuable work, demonstrating that finishing and electrifying the aircraft is feasible. Sharing their knowledge and enthusiasm was not limited to the team, as they were also spreading their wings to family and industry. The reason: they are proud to be part of Project DragonFly, such as I do!” said Mark Ommert, Project Manager & Engineer at Inholland University of Applied Sciences.

Electric Propulsion
Inholland University of Applied Sciences is redesigning the propulsion system of the Dragonfly towards a fully electric airplane. The internal combustion engine is replaced by an electric propulsion system, which includes a power source, converter and an electromotor. The redesign and modifications to implement these components require research on various disciplines. Randy van Ruijven, Aeronautical Engineer student, investigated the feasibility to electrify Inholland its Viking Dragonfly mk.II and defined the next steps of our roadmap. 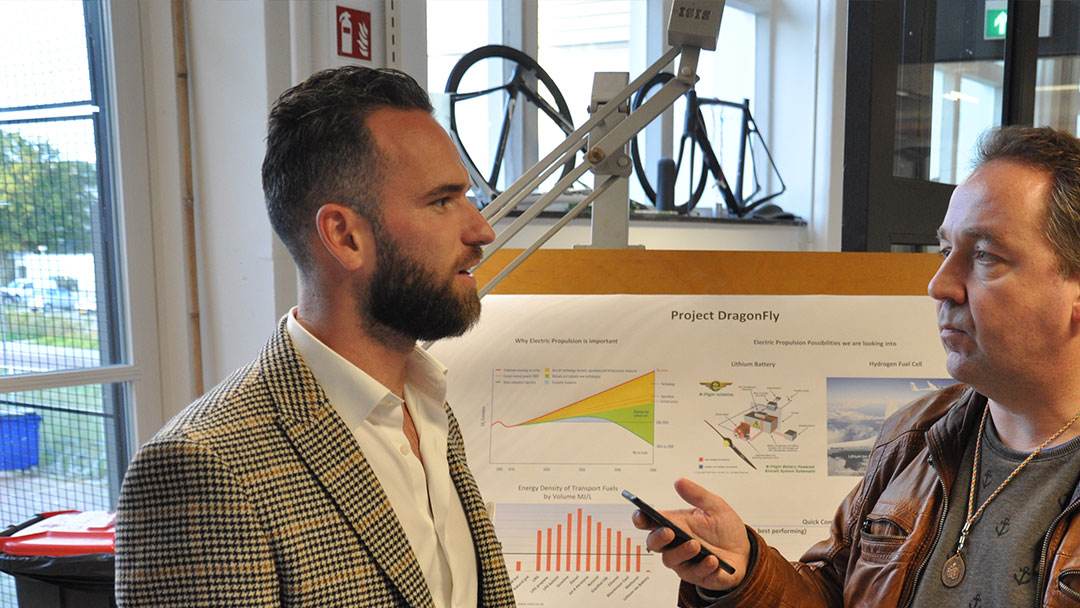 Randy van Ruijven sharing his vision on sustainable aviation and the contribution of Project DragonFly.

Randy is enthusiastic about helping build the future: “Due to the size and weight of this aircraft, the design is attractive for conversion to battery electric propulsion. I am firmly convinced that we will be seeing short flights using electric aircraft within ten years. And the aviation sector simply has to change. This also suits an industry that has always been at the forefront of innovation. Electric propulsion is the next big thing!”

Primary structure airworthiness
The aircraft was originally supplied as a kit for amateur construction. The Aviodrome in Lelystad got hold of a Dragonfly a long time ago as the original Dutch owner Mr. Thom Sijs agreed to store it at the museum, waiting for final assembly at a later stage. Now, many years later, it was decided that the Aeronautical Engineering faculty at the Inholland University of Applied Sciences would be a much better place to facilitate finalisation of the construction. To ensure the structural integrity of the unfinished Dragonfly, an airworthiness feasibility study is performed.

Aeronautical Engineering student Jitse Bos was responsible for this important research, as it is crucial for the ambitions of Project DragonFly. Jitse gathered relevant regulations for airworthiness and defined the status of the aircraft its build, taking potential composite weaknesses into account. This research showed that the aircraft is finished for 60 percent on 3 February 2020. 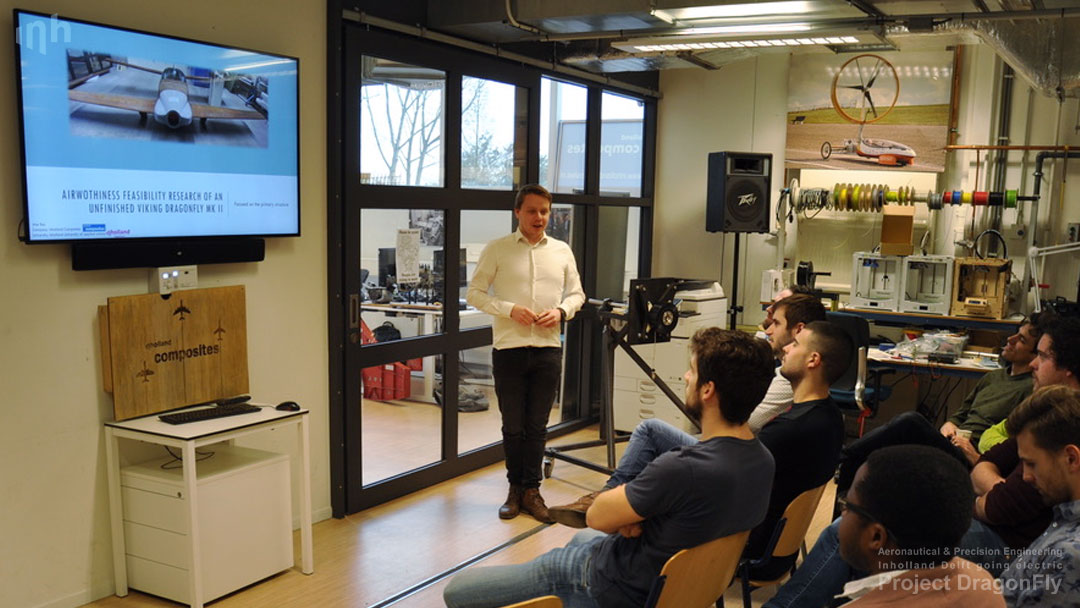 Jitse Bos presenting the results of his airworthiness feasibility research for the unfinished Viking Dragonfly mk.II.

“Based on the building progress, inspections and experts, the Viking Dragonfly mk.II is feasible to be finished and airworthy in the nearby future and can be used as a testbed for sustainable aviation.”, concluded Aeronautical Engineering student Jitse Bos.

Primary Control Systems & Avionics
In addition to the airworthiness feasibility research of the primary structure, it is important to investigate the status of the primary control systems as the assembly of these components has not been finished. In addition, research on avionics shall be performed as the intended avionics for this airplane does not completely match the user applications from educational perspective.

Patrick Lamers, Aeronautical Engineering student, performed research on avionics to be implemented and the status of the Dragonfly its primary control system. State of the art research on avionics is performed followed by designing concepts for the cockpit instrument panel. Based on regulations, pilot experiences and customer requirements, the final design is optimized and ready to be purchased and implemented. Parallel to this study, Patrick investigated the status of primary control systems and designed solutions for missing parts to be manufactured. 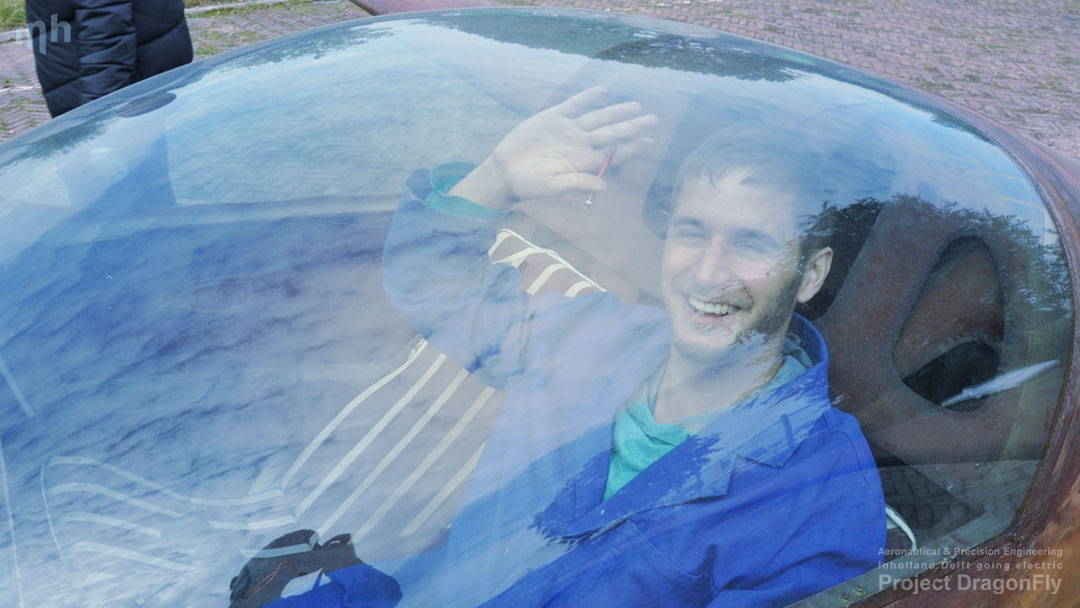 Patrick Lamers during an inspection in the DragonFly cockpit, as a baseline for the research on avionics and primary control systems.

“This initial research is based on existing technologies, however there is a huge market potential in smarter systems such as the implementation of glassed cockpits and Augmented Reality. The designed avionics configuration has the ability to be expanded with new technologies. This is a unique opportunity to use the Dragonfly for educational purposes and as a testbed for new technologies.”, said Patrick Lamers.

Smart and efficient using Mixed Reality
The next step in the roadmap is developing a Digital Twin of the electric DragonFly airplane bridging the physical and virtual world. The Digital Twin provides smarter solutions to potentially be smarter and more efficient in the iterative process of design, build and test products such as airplanes. This will vary from real-time simulations to Mixed Reality applications and advanced simulators.

Aeronautical Engineering student Kiril Medarov developed a mixed reality application to perform quality checks during manufacturing processes. This application is able to detect interaction between a virtual and real object, which potentially can detect manufacturing errors already on the production line in a smart and efficient way. In parallel to this research, Kiril invested lots of knowledge and time into the Mixed Reality application for Project DragonFly. The application visualizes performed research, which enables to define the next steps for product optimization and manufacturing. This helped Randy, Jitse and Patrick to optimize their design in a smart and efficient way. 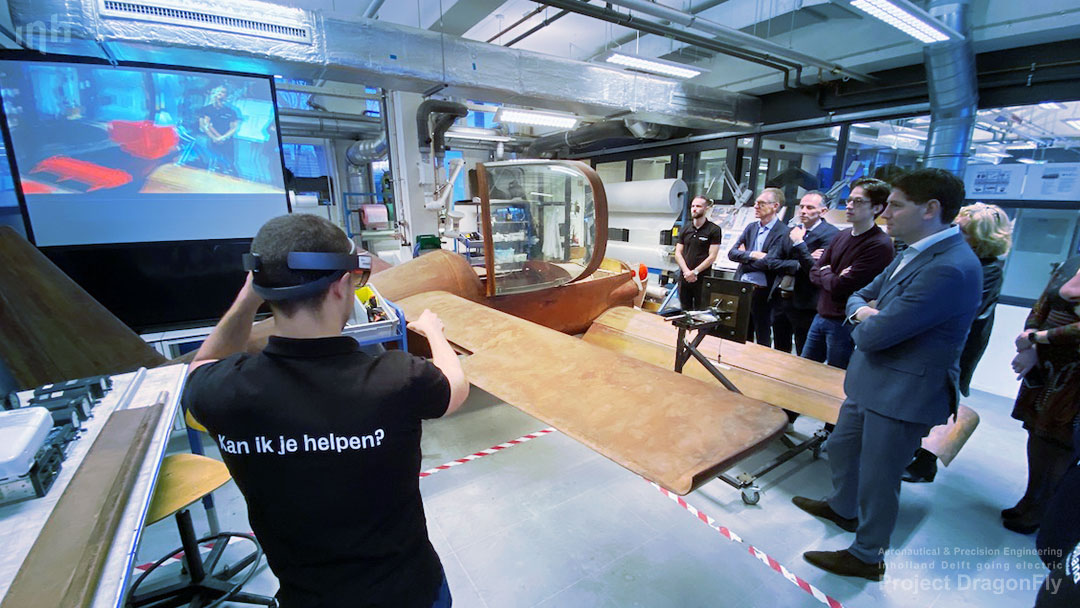 Kiril Medarov presenting the developed Mixed Reality application during the visit of Jan Paternotte, who visited Inholland and TU Delft to learn about the needs for Sustainable Aviation.

“The Mixed Reality application is a smart and efficient method to share information between students, researchers and the industry. The virtual designs can be compared to the physical state of the airplane, which is very useful to share the current state of Project DragonFly. This technology is ready to be implemented in the Digital Twin strategy and has a huge potential in the development of aircraft systems.”, said Kiril Medarov.